Braecrest Elizabeth – Katniss is a high quailty, correct, talented young mare. She was bred and born here at Braecrest, and unfortunately injured her stifle as a 4 year old. We’ve decided to let her have some time and carry a foal or two and see if she can return to sport afterwards.  She is sired by the hunter sire ‘Westporte’ and is out of ‘Radiant’ by Rotspon. With her pedigree, solid legs and feet, great movement, and wonderful quiet mind, we expect her to be a wonderful producer. 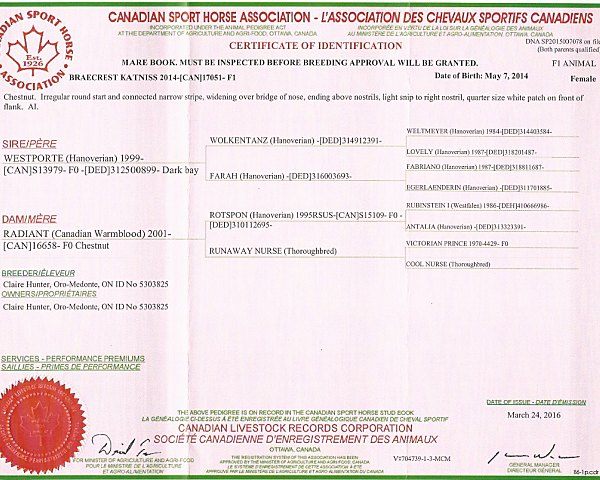 Braecrest Elizabeth – Braecrest Elizabeth has amazing substance, a strong and keen disposition, and all the makings of a very successful Hunter, Jumper, Derby, or Equitation Horse. She is sired by the Hanoverian Stallion Landkonig, and is out of our foundation mare Kalonja, by Pablo. Izzy was started as a 3 year old, and qualified and competed at the 2012 Royal Agricultural Winter Fair in the Cup Classes. She was wonderfully quiet and easy and loves the show life. As a 4 year old, she was bred to the Hanoverian stallion ‘Westporte’. She delivered a spectacular filly spring of 2014, Braecrest Waverly. Izzy was presented to the Canadian Sport Horse Inspection for breeding approval, and was granted Gold Premium Mare status. We have decided to enter her into our broodmare herd for the opportunity of passing on superb genetics and quality.

BRAECREST BRANDY – Grand Champion CSH at 2014 RAWF!  Brandy is an exceptional mare… beautifully correct, has the perfect amount of chrome, and has the most darling personality.  Brandy was presented as a three year old at the 2014 Canadian Sport Horse Breeders Show at the end of August 2014, and blew us all away winning trophies for Champion 3 Year Old CSH filly and Reserve Grand Champion! Brandy did exceptionally well at the 2014 Royal Winter Fair! She won Grand Champion Canadian Sport Horse, and pinned 6th and 7th respectively in the Governor General Cup and Lieutenant Governor Cup 2014.

Braecrest Brandy has also received the award for Champion 3 year old Canadian Sport Horse Filly of the Ontario Chapter in 2014!

Brandy is sired by the Oldenburg stallion Banderas, the first approved son of the sensational European stallion Balou du Rouet, to stand in North America. Balou du Rouet is highly sought after as a breeding stallion, he is very known for producing type, elastic movers, and his oldest offspring are showing his prepotency for first class jumping ability. Banderas comes from a very strong dam line through dam Grisette he combines some of the best bloodlines available. His dam sire is the legendary Grannus, one Germany’s greatest sires.

Brandy’s dam is the Selle Francais mare “Revel Sel De Mer”, sired by Jamestown and out of Kalonja by Pablo.

This outstanding mare is a fabulous new addition to our broodmare herd, and we are very excited about what she will produce for us! In foal to Capone I for a 2020 foal. In-utero purchase option available. 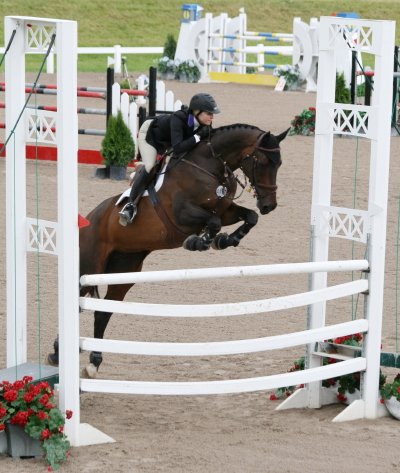 TIKITA – This outstanding mare had an impressive career in the Grand Prix Jumper ring. She had numerous wins and top placings in 1.40-1.60m both in Europe, Canada and the US. She sadly had to retire due to a career-ending injury. She can now pass on her amazing pedigree, talent and heart to some much-anticipated offspring! Tikita is by Corland, out of Nikita by Silvio II. Tikita’s dam line traces back to the famous Holsteiner line 776. Tikita had two foals in Europe before her performance career. A colt by Silverstone, and a filly by Indorado. Both of these offspring went on to compete very successfully at the 1.35m level and are still competing. Tikita had delivered a fabulous colt in 2015 by Cornet’s Stern. He will be one to follow! 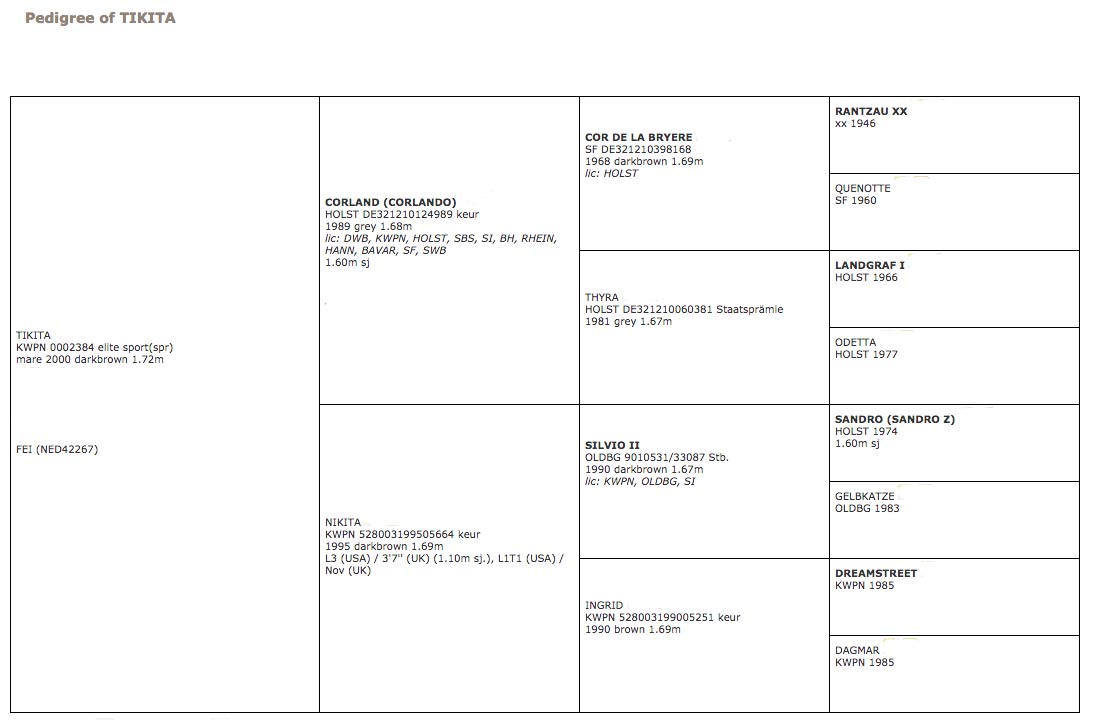 Confirmed in foal to Braecrest Beaumont for a 2020 foal. In-utero purchase option available. 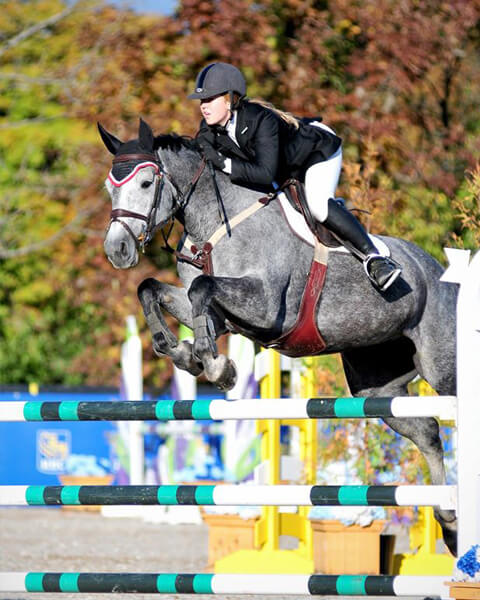 CORYPHEE – Coryphee is a beautiful example of her very impressive pedigree. She had a successful jumping career at the 1.30 level in Canada and the US. She is sired by the famous ‘Indorado’ and out of Orphee by Indoctro. She has an absolutely outstanding sport pedigree.  She has also retired young due to injury. We are very excited to have this amazing young mare join our breeding program, and look forward to seeing some outstanding foals from her. 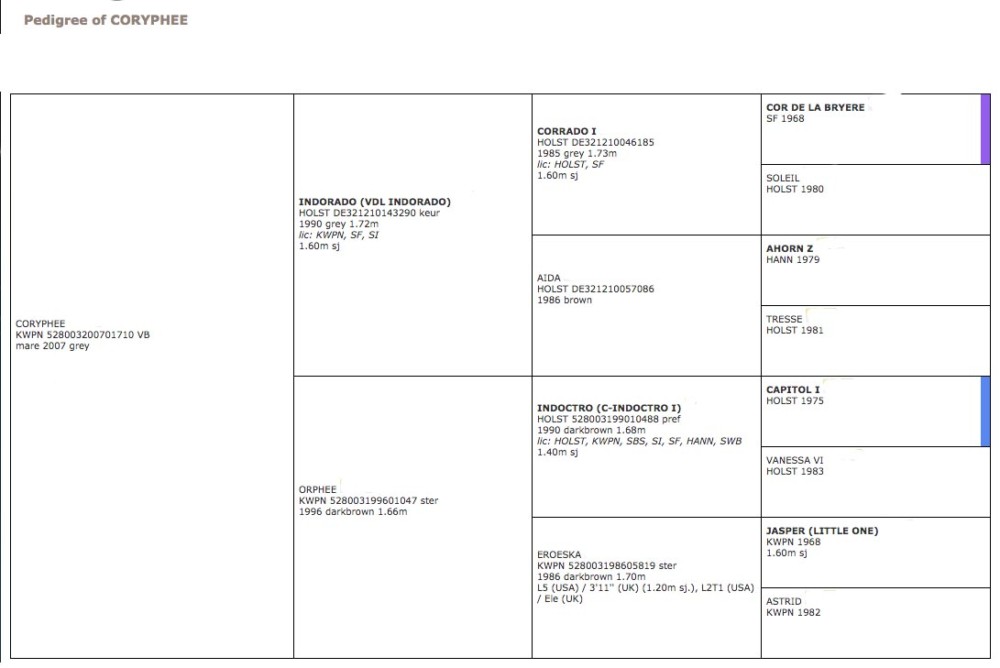 In foal to Valentino for a 2020 foal. In-utero purchase option available. 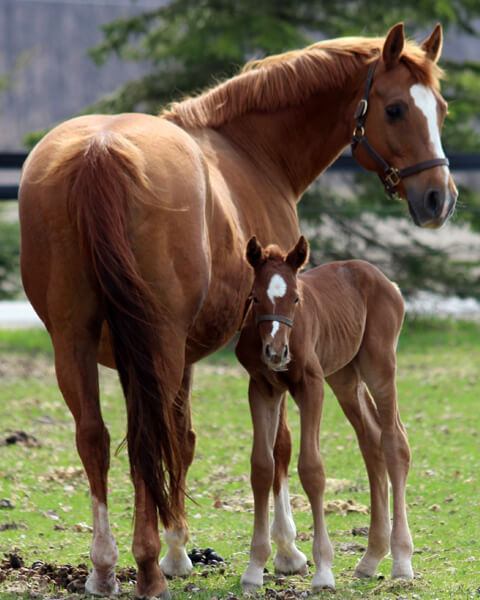 RADIANT – Radiant has dedicated most of her life to having beautiful quality foals. She is a Rotspon daughter, out of Runaway Nurse xx by Victorian Prince xx.   Radiant’s first foal for previous owner was by Don Frederico. This baby is outstanding! Radiant has had two foals for us so far, in 2014 and 2015, by the popular hunter sire, Westporte. Radiant stamps her foals with the most outstanding shoulder, neck, and expression, and very good bone. They are kind in temperament and love to work. 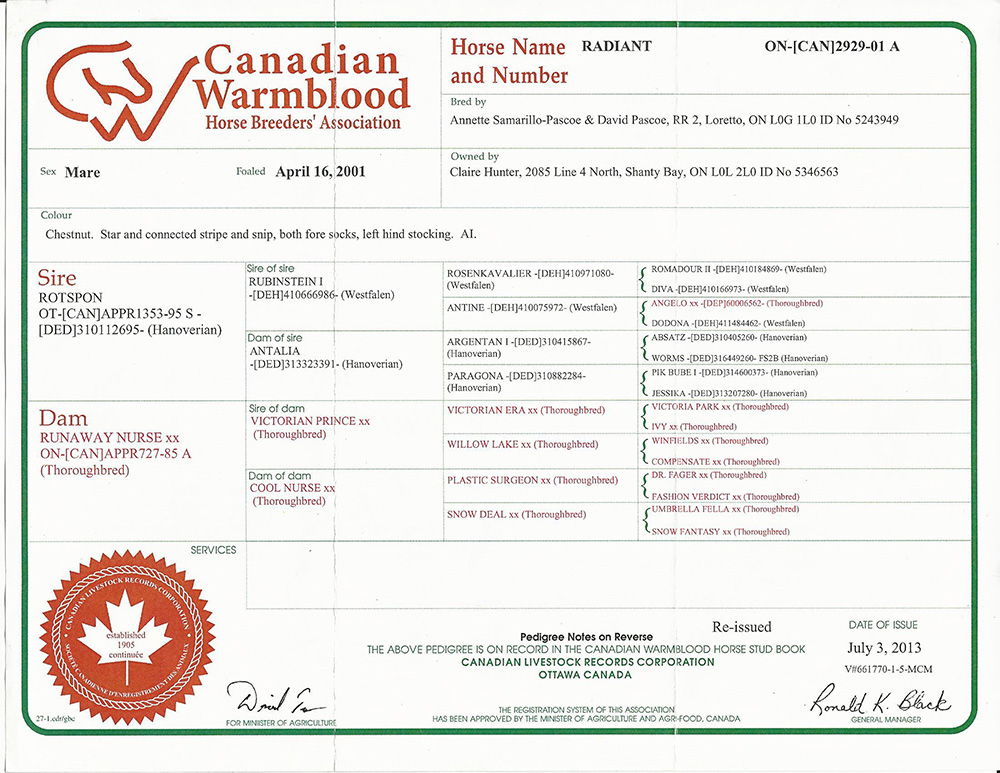 REVEL SEL DE MER – Revel Sel De Mer was started as a 3 year old and displayed fantastic ability and temperament to excel as a show jumper. Sadly she sustained an injury to her stifle that would affect her performance career, so she started her career as a broodmare. She has had 4 foals for us to date. Braecrest Brandy (By Banderas, 2011), Braecrest Balderdash (By Banderas 2012), Braecrest Felicity (By Westporte 2013), and Braecrest Channing (By Checkmate 2014). She is proving to be an exceptional producer of talented young horses with fabulous temperaments, correct conformation, impressive movement and great scope over fences. 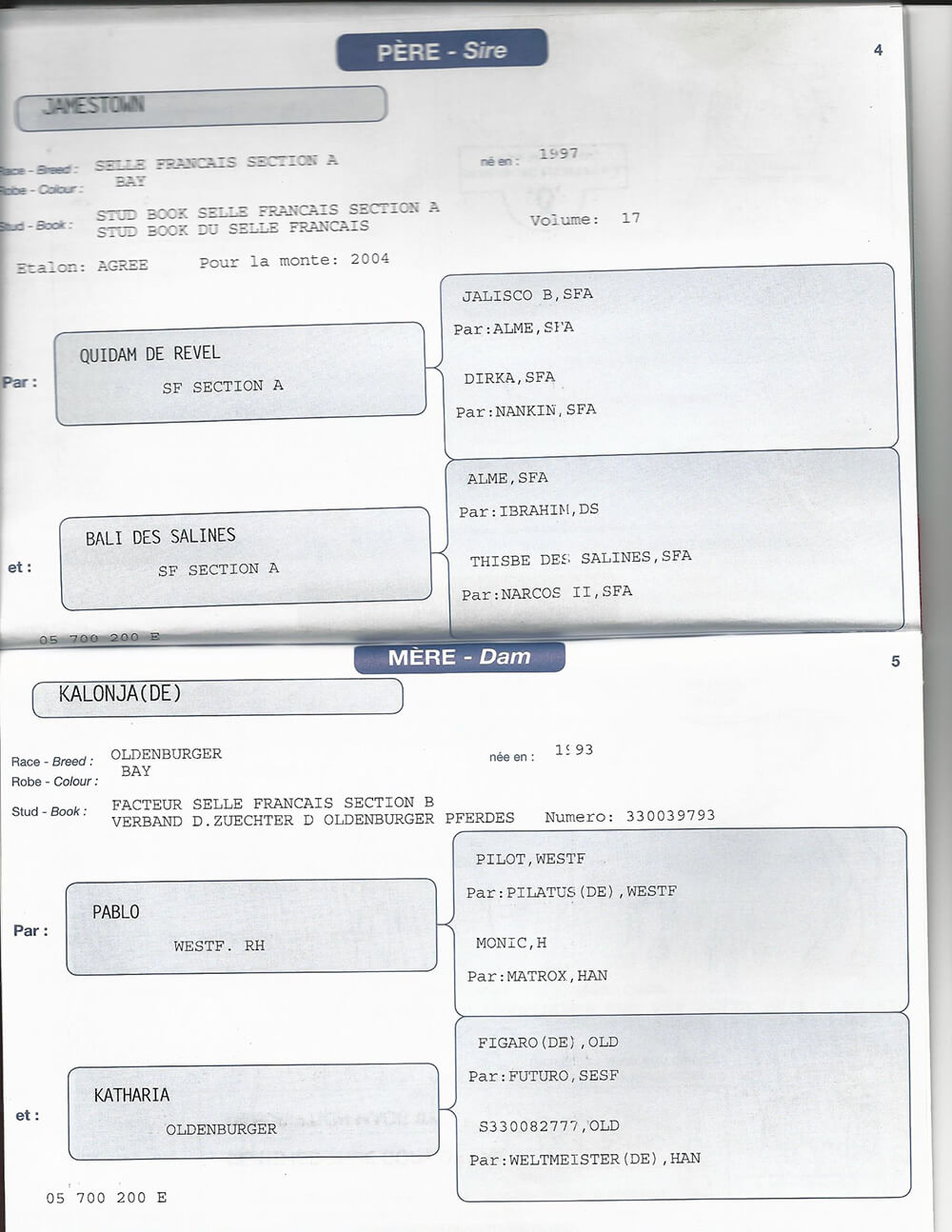 In foal to Cabardino for 2020 foal. In-utero purchase option available. 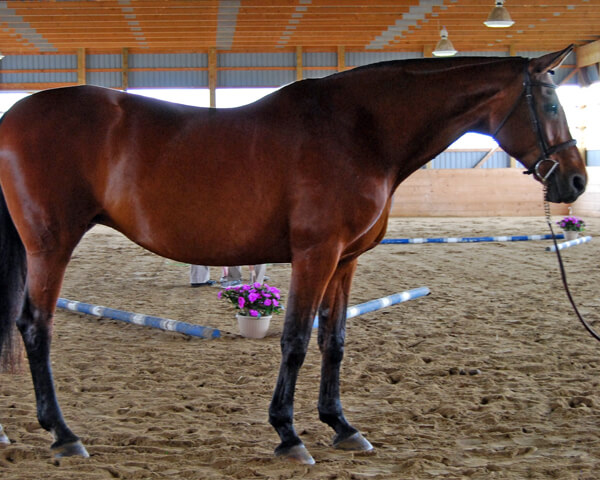 KALONJA – Kalonja was imported from Europe as a young horse by Spruce Meadows. She had a successful career showing in the 1.40 Jumpers, and then moved into the Hunter Derby ring in Ontario. She was passported and shown under the name “Panama”.  She had several big wins in the derbies, before retiring to being a fabulous broodmare.  Kalonja is our foundation mare. She has had 4 foals: Revel Sel de Mer (by Jamestown 2005), Panama K (By VDL Ulando 2007), Braecrest Elizabeth (By Landkonig 2010) and is the dam of our stallion, Braecrest Beaumont (By Banderas 2012).  We sadly had to let Kalonja go in January 2018 at 25 years old. 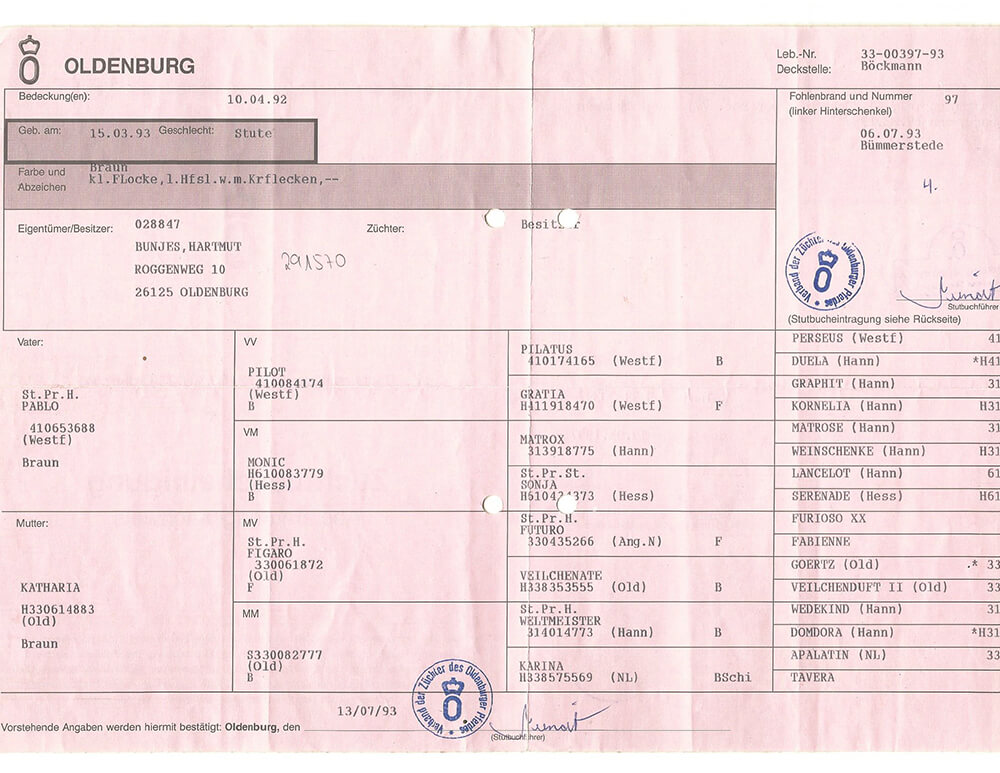 EM WILDFLOWER WF – Wildflower is a beautifully bred Hanoverian mare, with Elite Mare Status with the AHS. She is by Wellesley and is out of Alabama by Acapulco. Wellesley’s offspring have proven to be top hunters, jumpers and dressage horses, competing with great success at top levels. Winnie has competed at Gold and CDI shows across Ontario. Most notably, she was the Cornerstone Palgrave amateur division champion in first, second, third, and fourth level. Winnie also placed competitively in the Prix St Georges amateur division, earning scores in the mid 60s. Before she began her new life as a broodmare, Winnie was regularly schooling the Intermediare-I She was retired due to injury, and we had the fantastic opportunity to have this mare join our mare herd. She had one foal as a young horse that went on to be a very successful hunter on the Florida circuit. Her first foal with us was born in 2015, and is sired by Braecrest Beaumont. This filly moves like a dream, is correct and full of presence. 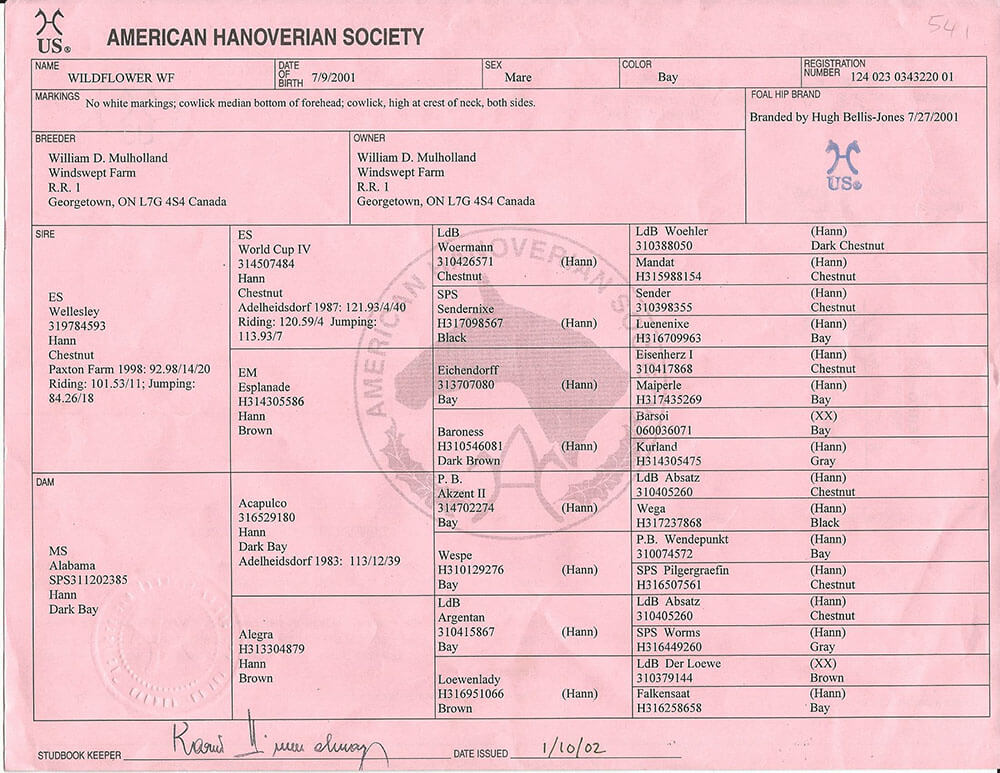 PANAMA K – Panama K was started under saddle as a three year old. She showed great willingness and talent, however it was decided that with her dam, Kalonja, retiring from breeding, that she was a great asset for our program, and would take her place in the broodmare herd. Panama K had a foal by Westporte in 2011 for a previous owner, and has given us a stunning filly, Braecrest Believe (By Banderas 2015). 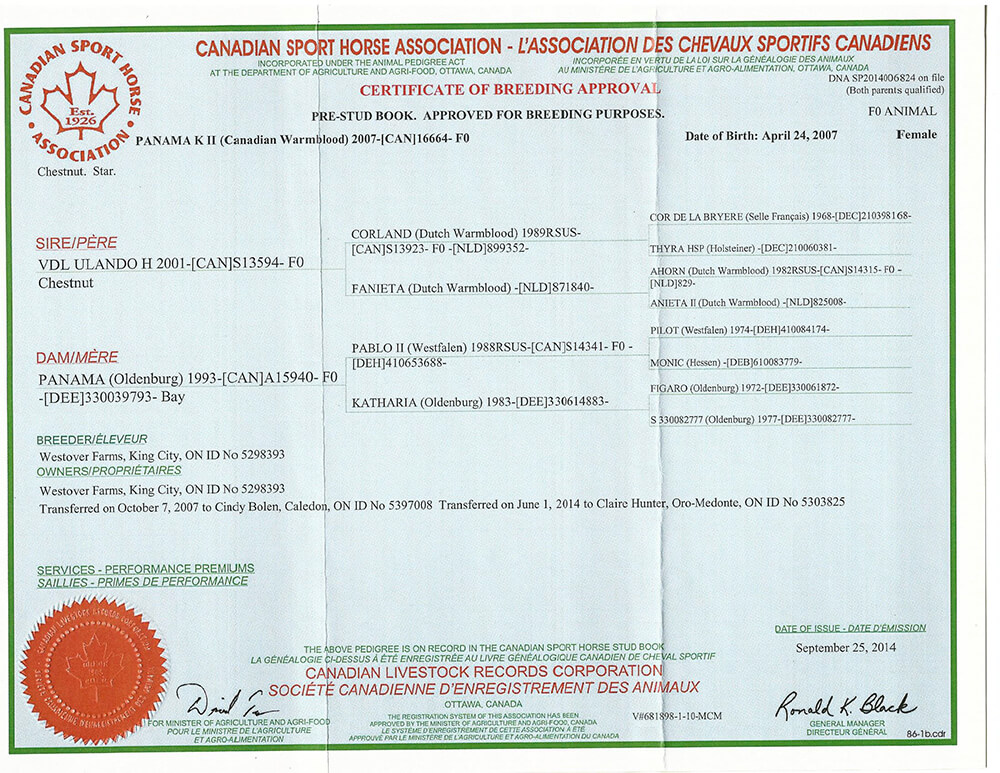